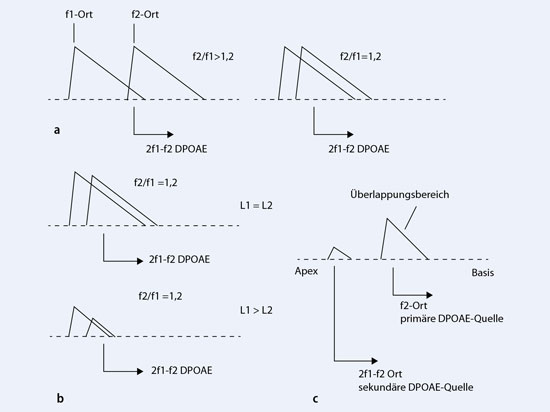 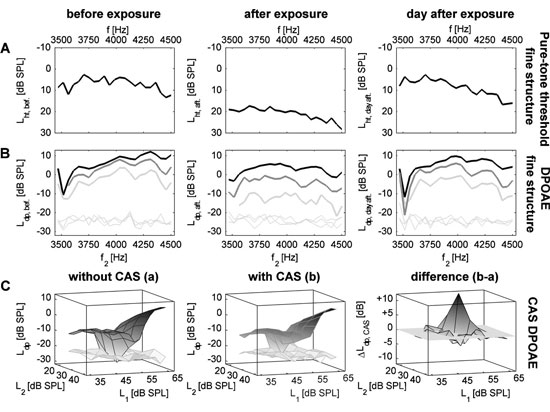 The aim of this study was to investigate whether distortion product otoacoustic emissions (DPOAEs) are a suitable means for detecting changes in outer hair cell OHCfunctionality due to exposure to three hours of discotheque music and whether efferent reflex strength of the medial olivocochlear bundle is able to predict the ear’s susceptibility to high-level noise. High-resolution DPOAEs (∆f2=47 Hz) were recorded between 3.5 and 4.5 kHz at close-to-threshold primary tone levels. For comparison, high-resolution pure-tone audiometry was conducted in the same frequency range. Efferent reflex strength was measured by means of DPOAEs at a specific frequency with and without contralateral acoustic stimulation. A significant deterioration of more than 10 dB was found for pure-tone thresholds and DPOAE levels indicating that three hours of high-level noise exert a considerable influence on hearing capability and OHC functionality. A significant correlation between shifts in pure-tone threshold and shifts in DPOAE level occurred when removing data with differing calibration across measurements. There was no clear correlation between efferent reflex strength and shifts in pure-tone threshold or shifts in DPOAE level suggesting that the applied measures of efferent reflex strength may not be suitable for quantifying individual vulnerability to noise. 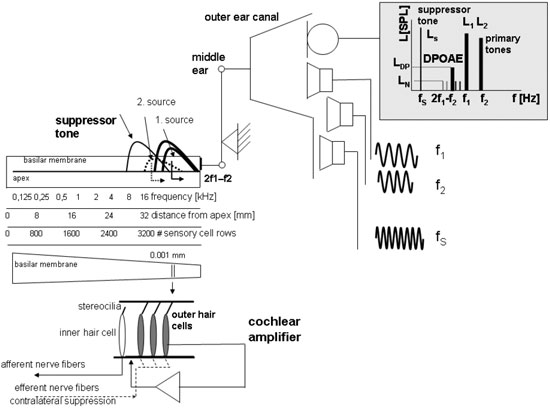 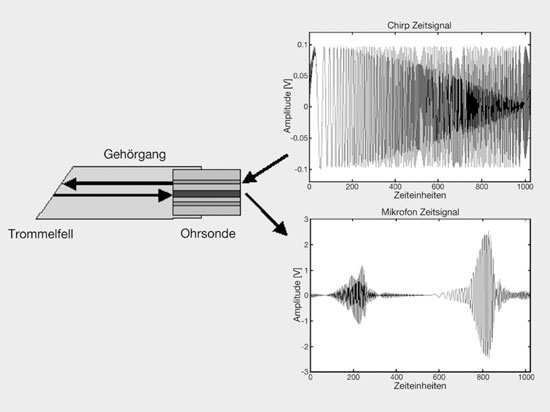 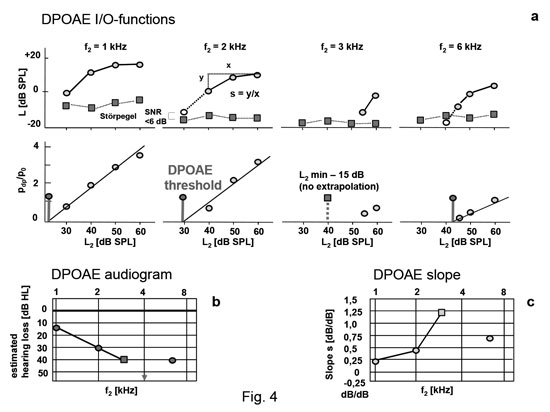 Whitepaper: Estimation of distortion product otoacoustic emission (DPOAE) thresholds and how they help assessing the hearing status of newborns. 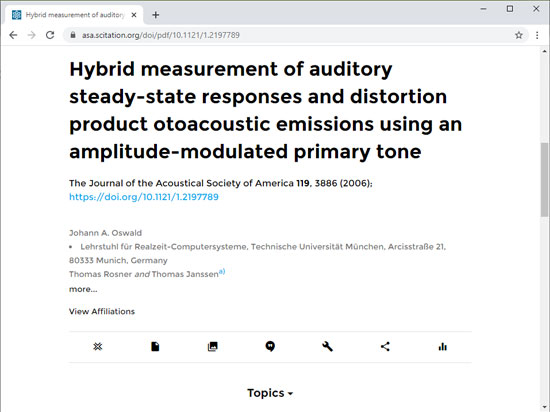 A maximum auditory steady-state response (ASSR) amplitude is yielded when the ASSR is elicited by an amplitude-modulated tone (fc) with a fixed modulation frequency (fm=40 Hz), whereas the maximum distortion product otoacoustic emission (DPOAE) level is yielded when the DPOAE is elicited using a fixed frequency ratio of the primary tones (f2 / f1=1.2). When eliciting the DPOAE and ASSR by the same tone pair, optimal stimulation is present for either DPOAE or ASSR and thus adequate simultaneous DPOAE/ASSR measurement is not possible across test frequency f2 or fc, respectively. The purpose of the present study was to determine whether the ASSR and DPOAE can be measured simultaneously without notable restrictions using a DPOAE stimulus setting in which one primary tone is amplitude modulated. A DPOAE of frequency 2f1-f2 and ASSR of modulation frequency 41 Hz were measured in ten normal hearing subjects at a test frequency between 0.5 and 8 kHz (f2= fc). The decrease in the DPOAE level and the loss in ASSR amplitude during hybrid mode stimulation amounted, on average, to only 2.60 dB [standard deviation (SD = 1.38 dB)] and 1.83 dB (SD=2.38 dB), respectively. These findings suggest simultaneous DPOAE and ASSR measurements to be feasible across all test frequencies when using a DPOAE stimulus setting where the primary tone f2 is amplitude modulated. 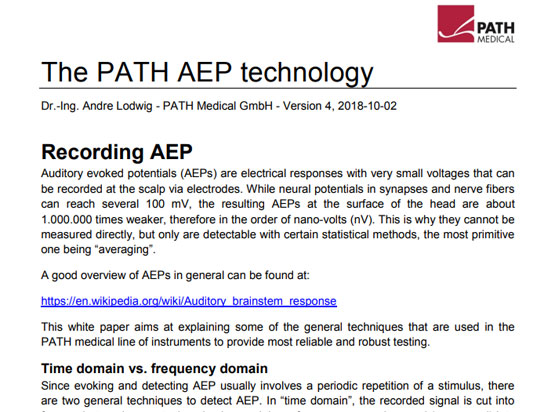 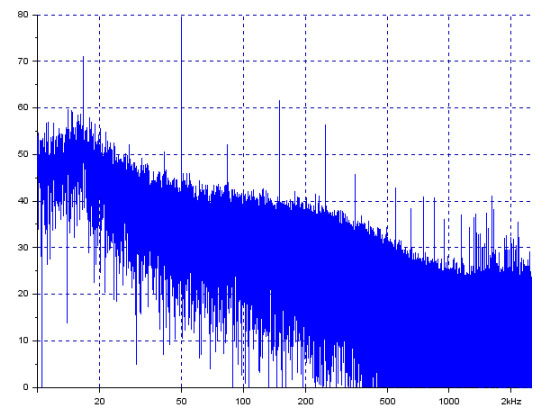 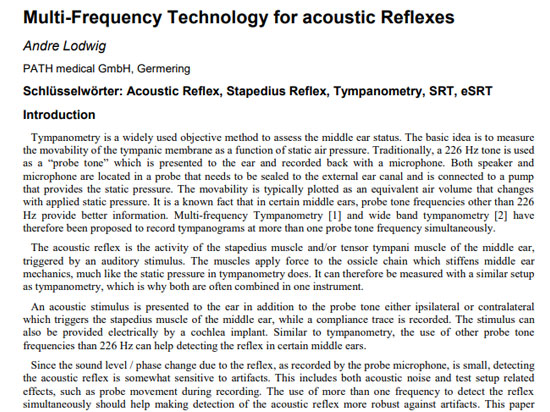 Conference paper: The multi-frequency technology used in PATH’s Sentiero devices to assess the status of the middle ear by simultaneously measuring the acoustic reflex in not only one probe tone frequency of 226 Hz but multiple frequencies. 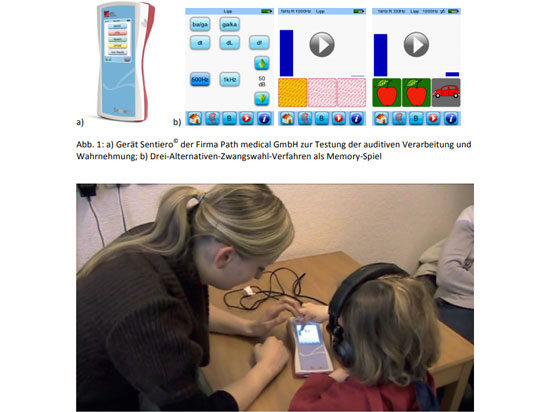 Paper: Short introduction on a specifically designed and easy feasible psychoacoustical test for children. Based on some sort of memory game this test helps diagnosing an auditory Processing Disorder (APD). 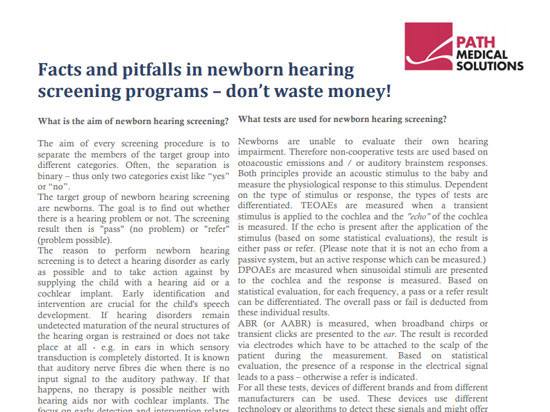 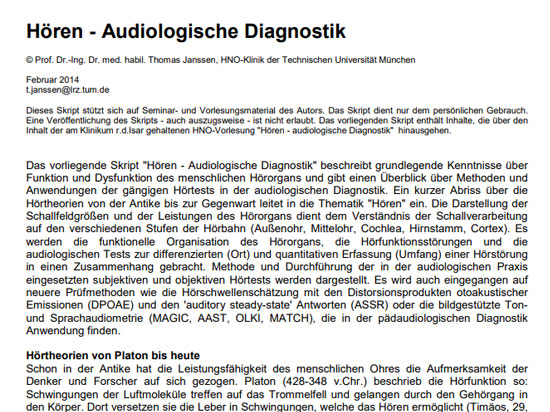 University lecture manuscript: Basic knowledge in physiology and physics, e.g. about function and dysfunction of the human hearing and an overview of methods an application of commonly used audiological diagnostics.